Apparently Initiation hasn’t just changed how I feel about myself, but how others perceive me as well; most notably, the children.

My S.O. and I ventured out into the world today to attempt some grocery shopping. Our pantry was depressingly bare after having gone through the marathon of Mardi Gras and then traveling to PantheaCon. Even though we got back late Tuesday night, I’ve had a serious sinus infection and both of us have been drop dead tired from the trip. (Kenny has also been recuperating from severe food poisoning at PantheaCon).

Since I don’t get the parental memos that apparently go around, I was not aware that today was “Take Your Adorable Child to the Grocery Store Day”. I usually despise trips to the store when this happens; masses of children are everywhere and it’s hard to just grab your things and Get Out While You Can. While I like children, I like them from afar. I guess I babysat way too much as a teenager. Also, for the past few years I’ve lived in college towns, working weird late night shifts, and little people just weren’t as present in my usual 2 am grocery forays. I forget to watch for them and inevitably end up almost stepping on one, resulting in being glared at by annoyed parents. (And who could blame them? I would probably glare at me as well).

While I’m used to scaring small children at the grocery store, today I seemed to absolutely terrify them. Generally I think my tall, booted, tattooed, pierced, crazy-haired appearance is what does it. But today I had many more intense reactions than usual. Children fled from my mere shadow. While this made my shopping experience slightly easier, this makes me wonder about how much more children see than adults do.

Christopher Moore, one of my favorite authors, has a quote in his novel Lamb: The Gospel According to Biff, Christ’s Childhood Pal (which is just as awesome as it sounds) that says “Children see magic because they look for it”. This quote always resonated in my own life and I have worked to make sure that adulthood hasn’t meant losing my sight of the the magical things I grew up believing in. This is probably in some sense what led me to where I am right now.

I’ve been working on a tattoo sleeve of fairy tales for a while now. One of the main pieces is the Wicked Witch. The witch in fairy tales is really the Initiating Priestess and to me at least, the character that usually drives many of the events of the tale to their rightful conclusion. Without a villain, what would the heroine have to do to triumph or change to become the person they need to be at the end of the tale? When my mother exclaimed “Why in the world would you tattoo the witch on you?!!!” my reply was “but I AM the witch”. It never occurred to me to be anything else.

As I stalked through the bustling aisles of our local Rouses, a few little girls paused in the aisle; instead of running and hiding behind their parents as the rest did, these girls paused in the middle of the aisle and unabashedly stared up at me in fascination. And I had the thought that maybe someday these were the same little girls that might come seeking me out for their own Initiations…how strange.

My S.O. and a fellow Blue Star Priestess went on a mission while at PantheaCon Friday night (I was not there, but this was how it was told to me)-

My S.O.  (briskly, to strangers in the hallway on the 10th floor): Point us to the Thelemites!

Strangers (instantly and with hand gestures): Second door on the right.

My S.O. (to the Thelemites): We seek ritual tools! *Names three items needed*

Thelemites: Yes! (And the items were graciously and kindly given.)

And then, after all of the time and work and thought, I went through my Initiation, the culmination of a fifteen year journey.

I’m sure there will be a lot more to say later, but for now, I’m going to enjoy the moment. I’m going to just sit back and enjoy what I’ve accomplished, cause honestly, it feels pretty amazing. And the conference? What conference? I’ve done the thing that I came to San Jose to do.

(I can neither confirm nor deny that this is what happens!) 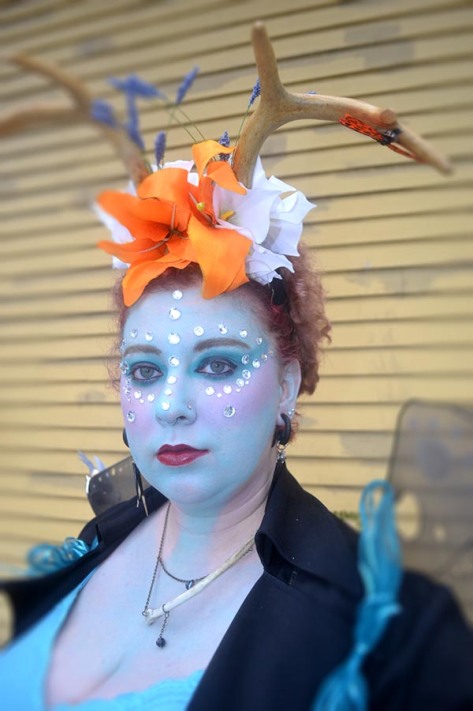 I just wrote a guest blog for Kenny Klein about my experience at my favorite Mardi Gras parade, Muses. Check it out here!

Kenny Klein and I will be at PantheaCon this coming weekend. If you are in San Jose, come and say hi!

Then coming around up the path from the deep cut of the Natchez Trace below was a line of bare crape-myrtle trees with every branch of them ending in a colored bottle, green or blue.

There was no word that fell from Solomon’s lips to say what they were for, but Livvie knew that there could be a spell put in trees, and she was familiar from the time she was born with the way bottle trees kept evil spirits from coming into the house – by luring them inside the colored bottles, where they cannot get out again.

Solomon had made the bottle trees with his own hands over the nine years, in labor amounting to about a tree a year, and without a sign that he had any uneasiness in his heart, for he took as much pride in his precautions against spirits coming in the house as he took in the house, and sometimes in the sun the bottle trees looked prettier than the house did…”

Over the holidays, two of my good friends moved into a new apartment. Down here, most people live in what we call “Shotgun” apartments. Essentially the apartment is four or five rooms straight in a line, with doors at each end of the house. If you stood at the front door and fired a shotgun, the bullet would go straight through the house. In New Orleans, one of the reasons that shotguns became so popular is that houses were taxed by their frontage feet. If your house was short in the front, but ran long in the back, you didn’t have to pay as many taxes. They were also economical housing for the immigrants who came to work in New Orleans. Many of whom were from Haiti, where they say the style originated. Over half of these shotguns are duplexes, which we call “Double Shotguns”. My friends moved into one half of a double shotgun.

Double shotgun in the Garden district. Photo by Kenny Klein.

While I love our picturesque shotgun houses, what caught my eye about my friend’s, is that their neighbors have a bottle tree. 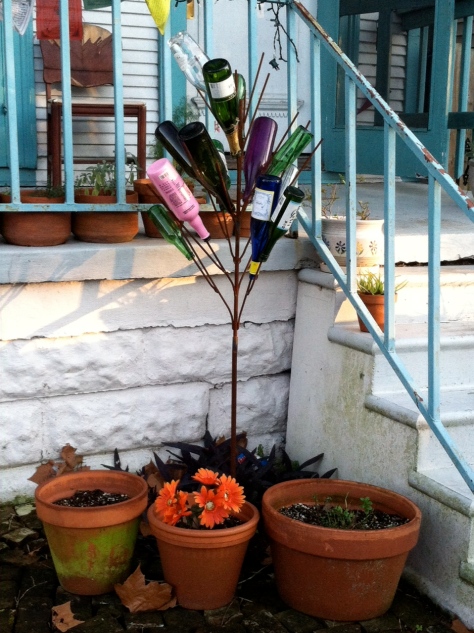 My friend’s neighbor’s Bottle Tree. Photo by Someone Else’s Diary.

Bottle trees are one of my favorite pieces of folk magic. Bottle trees supposedly catch the spirits that come out at night and hold them until the morning light can burn them up. Bottle trees like this come from the African traditions brought over by the slaves in the South and remain a fixture of Southern folk magic and culture. So many people love them that these days, they are also considered to be folk art, and many companies will simply manufacture them for you. I prefer my bottle trees like the rest of my magic, created and done by myself.

Of the bottle trees found in popular culture, Mama Odie from The Princess & The Frog has my favorite. (And whoever drew that movie knew more than a few things about magic and magical symbolism…take a look at the tarot cards used).

In Northern Europe, this same idea is expressed through witch balls.

Both Bottle Trees and Witch Balls are made up of glass, which often seems to get overlooked as a magical tool. While glass is most often man-made (don’t forget about fulgurites and obsidian!), I see glass as being the combination of all of the elements, in the same manner as an athame is. It can also exist in more than one physical state, and is excellent for carrying a multitude of different musical vibrations. It is also one of oldest manufactured materials used by mankind. What better material for catching spirits?

The vibrations of the glass itself probably has more of an effect on the energy around it than their supposed spirit catching abilities. So whether or not you believe that Bottle Trees or Witch Balls are actually catching spirits or “haints”…the glass itself is probably affecting it’s immediate surroundings through its vibrations, keeping the energy of your yard or home just a little more charged than usual and that in and of itself is a pretty interesting phenomenon.