We were out walking last night when this fellow showed up. 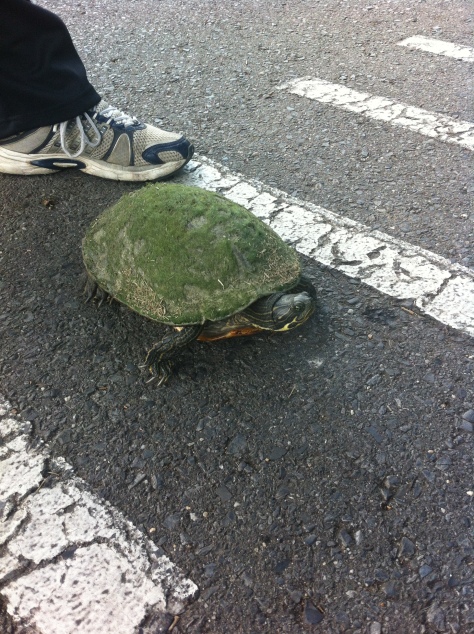 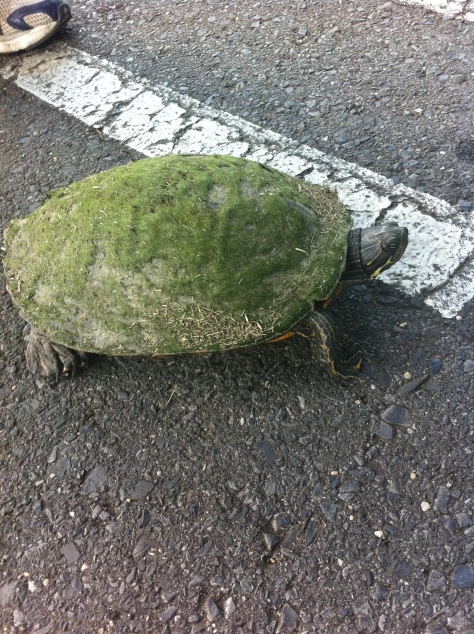 Reminding me that slow and steady wins the race.

This is from Witches and Pagans and was originally published on the 24th of May, 2013:

Invocation is one of the penultimate acts that a Priest or Priestess can perform, for themselves or in a group ritual.

This ritual is one of the things that separate us from other religions. In some ways, it is the most important act that we do for our covens. Through our priests and priestesses, coveners can speak directly to our deities.

And it seems to be an element that is disappearing from many modern Pagan rituals, or is being replaced by the reciting of the Charge of the Goddess or another sacred text. (This is not to say that in and of itself this is not a powerful thing, but it is not what traditional practice defines as invocation).

Invocation is one of the true “mysteries.” Learning to invoke or “Draw Down the Moon/Sun” is not something that the raw beginner should ever attempt. Inviting a deity to use you as a vessel to speak though is an extremely serious matter. A great deal of traditional training is about working someone up to the point where invocation can be done safely, and the practitioner can manage to come back from it without consequence.

Full on invocation is akin to a spiritual possession. When channeling deity, you are not the one in charge. In Voodoo, they say that you are “ridden,” and I think this is the best description of what happens when you invoke fully.

When my partner invokes, his eyes change color, he smells different, he moves differently and the “person” looking out at me through him is definitely no longer the same one that was there before. It’s scary, it’s comforting, it makes me want to laugh and yet weep hysterically at the same time. I never know whether I should throw my arms around him or prostrate myself on the ground. I’ve been given riddles, words of encouragement and full on lectures during these moments. Sometimes it lasts for a long time, sometimes for mere seconds. Sometimes the God looks out at me, winks and then leaves again.

Many people have told me that the things that occur when deity is invoked have been some of the most important and life changing spiritual moments they’ve ever experienced.

Anyone who tries to convince you that invocation is not a serious act is selling something. Even those people I know for whom invocation has come easily have always stressed the importance of understanding that you are channeling deity and that “you” are no longer at home.

Over at Patheos Pagan, Sable Aradia wrote a column titled “Seekers and Guides: A Balm for a Pagan Plague – High Priestess’ Disease (Part 1)”, where she talks about some of the same issues that I brought up in my last blog here at Pagan Square. Sable Aradia is discussing “the spiritual malaise that causes some of us to develop an inflated sense of our importance and “power trip” on being a Wiccan Priest(ess)”. She discusses the fact that the Craft gives people who have considered themselves to be without power a place to wield power. She also discusses that these Ego trips can be tied back into the work we do in the Craft, specifically invocation, stating:

Wicca is a mystic’s path. Ultimately, its greatest mystery is union with the Divine; what we call “Drawing Down the Moon” and “Drawing Down the Sun.” In order to achieve that, we must break down the dross of our personalities. Not all of our personality, just the stuff that interferes with our ability to channel our Divine Selves. Think of it as a refining process. We are trying to become better conductors. Pure gold is the best conductor for electricity, and pure copper follows that, but elements are rarely pure in nature and so they must be melted, tempered, and beaten in order to reach that state of purity. We are no different; and frankly, the process hurts and we resist. However, the more we resist, the greater the pain. Someone who is suffering from High Priestess’ Disease is having their ego challenged and they are resisting alchemical transformation of the spirit. That is why Wicca demands that we choose this path of our own free will.

While Sable Aradia’s point about Ego trips and Priest/ess power trips is certainly a valid one (and I agree with all of the other points she brings up), I disagree somewhat with this assessment of invocation. For me, invocation is completely giving up my “self” and retreating to the deepest reaches. It is staying behind, while She moves forward. It is not a matter of resisting; it is a matter of knowing how to stay still. There is no room or place for Ego in that moment. In some ways, I have to understand my boundaries even more clearly than before, so that I can stay as far back within them as I can to let Her take my place in my physical self. This is not a breakdown of my “self;” it is in some ways the ultimate definition of self. I have to understand myself to pull everything I am back, and leave it behind while She decides to use my physical form for Her voice. It is not something for me to resist, it is something for me to consent to. It is not pain, it is joy.

This is not a challenge to my ego, it is a complete override of my ego. After each experience, I am overwhelmed that She has been present within my lowly, physical being and I feel humbled at the honor of Her presence.

I see these issues with ego in regards to both sides of invocation as coming from the lives we lead outside of the Craft, not the actions we work within it. In learning how to invoke, I have learned an even greater respect for those Priests and Priestesses who have gone before me. As a Priestess, my ego needs to be left at the door. When I took on that role, I left my right to my ego behind. I serve a greater purpose for both myself and for others. When invoking, I am not looking for respect or power, I am looking to be a vessel to serve my group. She is not asking me to break myself apart, but simply that I step back and let Her through.

Invocation is a service that I give of myself. It is something that should never be demanded of someone or be used to judge the “power” of someone’s priest or priestesshood. Every time someone invokes, there is that small possibility that they won’t come back from the experience. It is, in some ways, the ultimate sacrifice. Anyone who sees invocation as a place to claim ego has missed the point entirely. This issue of ego is not found through the personal refining processes of the Great Work, it is something that hasn’t yet been discarded in this person’s transition from mundane life to Priestesshood.

Yes, respect the person who is invoking. Support them when they need a moment to recover, and recognize the service they are giving, but more importantly, listen to the presence that has come through them and take away from it that sense of wonder that can be found in coming face to face with the divine. Invocation is powerful, but not because of the Priest or Priestess doing it. It is powerful because of what it manifests, and that we get to have for a the barest sliver of a moment the center of that focus.