Today of course starts one of my busiest weekends of the year!

It might be a little cliche, but Samhain is my favorite sabbat and I go out and participate in numerous Halloween activities around the city.

This year, for our costume day at work, I decided to go with Miss Argentina from the movie Beetlejuice. Miss Argentina is literally on screen for about 10 seconds, but she has always been one of my favorites.

Miss Argentina is the receptionist in the Underworld. I think that would be an amazing job to have!

Hades…Arawn…any Underworld Gods/Goddesses out there…I have excellent filing and customer service skills! (Or maybe I shouldn’t tempt that one…?) 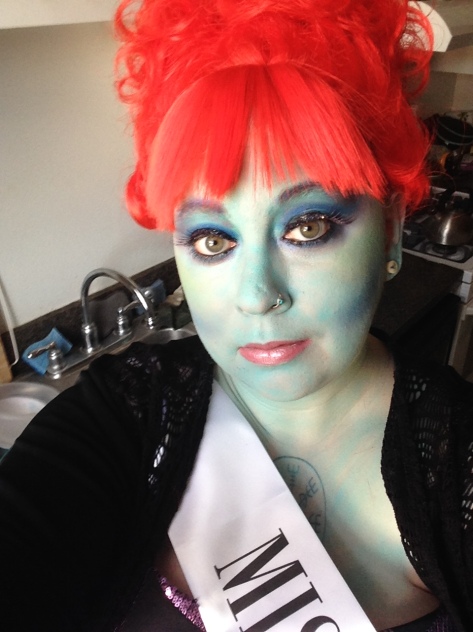 This was originally posted on Witches and Pagans on October 28th, 2013. I know we’re slightly out of season, but I’ve been working on some research that relates to this topic. Plus, I really like mythological pigs. They make me happy. Enjoy:

Samhain: During this time of year, some people celebrate the Lady’s return to the Underworld. Others remember their ancestors and give thanks and blessings to those who have come before us. Still others celebrate the end of the Harvest. Samhain is a time of diverse celebrations and remembrances.

I, however, think about pigs.

Let me tell you a story:

Once upon a time, a king was hunting in the forest. As he was mustering his own pack of dogs, he heard a strange pack of dogs baying. As he and his dogs came to a clearing in the woods, he finally caught sight of the other pack of dogs. These dogs were white with red ears and they were chasing a white stag. (This should have been his first hint that this was no ordinary pack of dogs).

The strange pack of dogs brought down the stag and the King, whose name was Pwyll, had his dogs drive them off so that he could claim the prize of the stag for his own pack.

As his dogs fed, another Huntsman appeared in the clearing.

Pwyll, King of Dyfed, greeted the stranger, but the stranger refused to introduce himself because of a great discourtesy Pwyll had done him. When Pwyll asked what discourtesy he had given, the Stranger answered.

‘I’ve never seen a greater discourtesy by a man than driving off a pack which has killed a stag, and [then] feeding your own dogs on it.

Art by Alan Lee for an illustrated version of the Mabinogion

That’ said he ‘was the discourtesy, and though I won’t be revenging myself on you, between me and God, I will be claiming dishonour from you to the value of a hundred stags.’

‘Chieftain, if I’ve committed an offence, I will redeem your friendship.’

‘In what form will you redeem it?’

‘A crowned king am I in the land I am from.’

‘Lord,’ said Pwyll ‘good day to you. Which land is it that you are from?’

‘From Annwvyn. Arawn king of Annwfn am I.’

It’s never wise to upset the God of the Underworld, and Pwyll realizes too late who he has offended. Arawn asks Pwyll for a service to restore his honor. Pwyll happily does the service asked of him, and this begins a great friendship between the Kingdom of Dyfed and the Kingdom of Annwn. Pwyll himself received many gifts from Arawn, the most important of which is Pwyll’ s wife, the goddess Rhiannon, which is another story entirely. (If you want to read the whole story, you can find it here). But the greatest gift the Kings of Dyfed receive from Arawn is a herd of swine.

This story comes to us from the first Branch of the Mabinogion. Throughout the Mabinogion, the ownership of the pigs is an important issue. Whoever owns the pigs has a close and friendly relationship with the Underworld, which brings them both prosperity and happiness.

Also from Welsh folklore, we hear about Henwen, the White Sow (another Underworld creature), who brought abundance to England by birthing litters of bees, wheat and barley. She also birthed eagles, ferocious cats and wolves. Henwen is a goddess of prophecy and would use sticks and runes to spell out someone’s future for them

We see sacred pigs in many stories throughout European mythology.

The pig was sacred to Demeter, a goddess that is an important part of the Greek Underworld story of Persephone and Hades. This spilled over onto the Roman goddess Ceres as well. Sacred pigs were herded into caves for the goddesses in both lands. While most people agree that Zeus was suckled by a goat, some say he was suckled by a sow.

Circe turned Odysseus’s men into swine on his journey returning from Troy.

The great goddess Cerridwen was known as “The Old White Sow” and the Irish god of the sea, Manannan had a magical herd of pigs.

The Russian witch/goddess Baba Yaga is also often thought by some to ride a Sow through the forest instead of the flying mortar.

In Norse mythology, the boar is a symbol of Odin, and the Valkyries serve the warriors who feast in Valhalla from the boar Saehrimnir.

Pigs still tie us to the Underworld, which is why I always “sacrifice” a pig on Samhain. This is a reminder to me and to the Gods of the relationship that we have with the Underworld. While most of us can’t actually sacrifice a pig, I make a delicious pork dishes and leave them out as offerings to stand in as a replacement for a living swine. 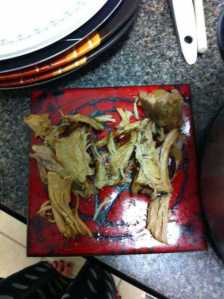 My “pig” sacrifice for the year, made with pork roast and bbq sauce

So while you’re enjoying your Samhain festivities this year, whatever they may be, remember the pigs! They may sound like an odd creature to appreciate, but they are an important tie to the Underworld that can bring your home health, wealth and prosperity.

*I wrote a children’s Henwen ritual for Samhain over at The Pagan Household. If you’re interested, you can find it here!

It amazes me how hard its been for some of my fellow dedicants to learn about the Mabinogion. So I’m going to break it down for you…with pictures.