Today my friend Lily White Lefevre sent me this blog post about making life more beautiful instead of trying to make it better. In it, the author says:

Beautiful is a million little moments.”

And for me, that’s what Wicca is. In the midst of hardship, life, frustration, anger, grief and anxiety, Wicca is a way for me to make the world around me a little more beautiful.

In college, I had some serious medical issues and had a few terrible years. I had given up on religion, because I couldn’t find anything in Christianity that called to me. The church was an ugly place in the midst of an already terrible world. Life was bleak and there was no joy to be found. When I realized I needed spirituality in my life to balance out my physical and mental space and sought out new ways to find it, the world changed for me. Beauty came back to me. What had been a bleak, depressing time in my life was transformed. Magic, ritual, acknowledging the gods and spirits in the world around me, allowed me to see my life differently. The relationships I built with the people around me changed as well. Art, music, creativity all came back to me.

This is what I try to explain to my students. No matter what is going on in the world around you, you have the power to create something different, to create beauty to fill that void. When I raise energy for the gods, I do it out of love and respect and to make sure that the beauty in their worship continues, but also for the joy it brings me. Ritual is a dance of balance that creates beauty, grounded purpose and relief from the daily grind. Even when I practice working rituals, I come out of it feeling centered and lighter than when I went in: “For mine is the ecstasy of the spirit and mine also is joy on earth.”

It is so easy to give up on beauty. We see it as being a perk, something that is unnecessary and that can easily be set aside. It is something so easily lost in the midst of everything else. But beauty brings things to our lives that better never can. It is not a hardship, it is not something I have to force. In a world where I have to do things that I don’t want to, Wicca is beauty and I can’t imagine a life without it. 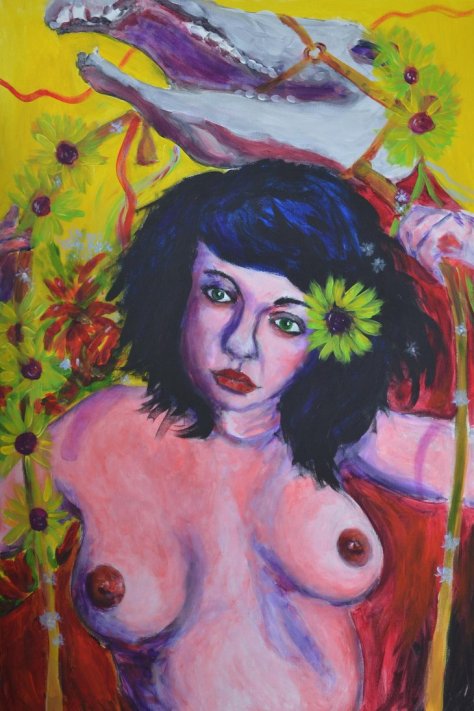 Mari is a goddess that always brings me joy! Painting by and copyrighted by my partner.

Coming back from Los Angeles we stopped at several of the National Parks. I have never been in the desert like this before and I wanted to share some of the pictures I took with you. The dry land of the desert presents both the possibility of death, but also infinite life. The way the ancient people’s survived in this landscape is remarkable. Both the silence and the dryness sank into me and I was very glad to come home to Louisiana and see both trees and water!

Our first stop was Montezuma’s Well, home of ancient cliff dwellers. This little set of cliff dwellings sprang up around a deep well in the desert. Formed by the collapse of a limestone cavern, nearly one million gallons of water a day flows through these vents. The ancient people who lived here flourished around this water supply in the middle of the Sonoran desert. While the water contains arsenic and only five species of creatures manage to live in it (the main one being leeches), this was a valuable source of water. 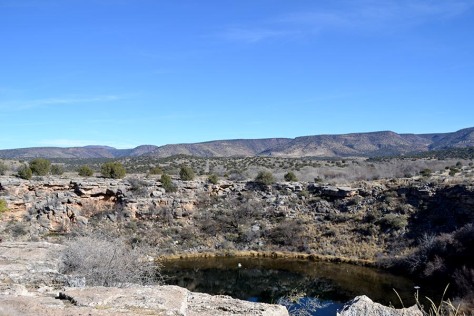 The Sonoran Desert is a bleak place, though also very beautiful. Montezuma’s Well is a rarity in the area.

Built above the well is one set of cliff houses. 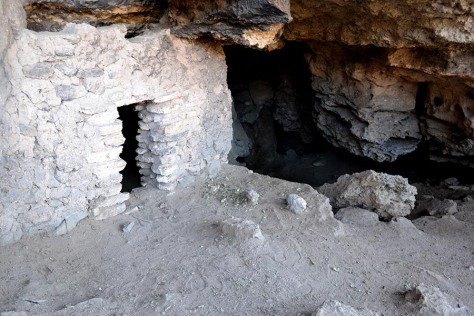 Right next to the well itself is another set of homes in the base of the cliff. 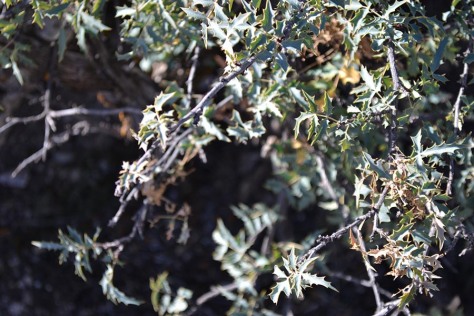 Live oak grows all around the well in short, scraggly patches.

Just down the road from Montezuma’s Well is Montezuma’s Castle, one of the most famous of the cliff dwelling places. The valley these sit above is a little greener and wetter than Montezuma’s Well. Slightly more protected from the elements of the desert, this pleasant little creek valley was the home to many people over about five centuries. The people who lived here were the ancestors of the Hopi, who still return to visit to this day to perform ceremonies and rituals to their ancestor’s spirits.

These houses are several hundred feet up the cliff face and took several layers of ladders to get to. This served as protection from other neighbors.

A close up view. Today, visitors are not allowed up to the dwellings themselves, but when they were first discovered, many people braved the ladders to go up the cliffs to see what was inside. Many archaeologists and architects have explored and examined the ruins.

Nearby, near the bottom of the cliff, lay another set of cave dwellings that have not managed to remain as well preserved as the ones above them. These however are more recent and more easily examined and many of the finds from the people who used to live here came from these homes.

A view of the cliffs themselves.

Unlike Montezuma’s Well, there were many trees in this area.

The next day we went to the Petrified Forest and the Painted Desert. Both show some of the extreme beauty and transformation of the desert.

The Petrified Forest used to be a swamp, millions of years ago. Here, the large trees were swept through the swamp that used to exist here to settle at the bottom and slowly transform over time into solid rock. This process is called permineralization, which is where all the organic material is replaced over time by minerals, that stay in the same structure as the original stem tissue. The minerals that are left behind are beautiful pieces of quartz and amethyst and many others.

While it might have used to be a lush tropical swamp, today it is only barren sand and rock. 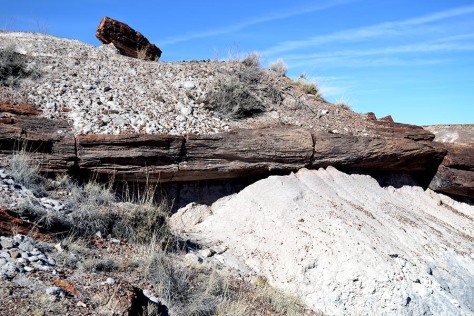 You can still see where the logs were buried under the sediment for millions of years. Its probably that there are still many pieces buried underneath the earth still today. While petrified wood is not unique to Arizona, this is the only place in the world that a “forest” like this exists.

Inside these logs, beautiful colors lurk…

And many crystals are still forming!

Many of the logs have broken a part over the years so that you can see what crystals and quartz’s are inside. 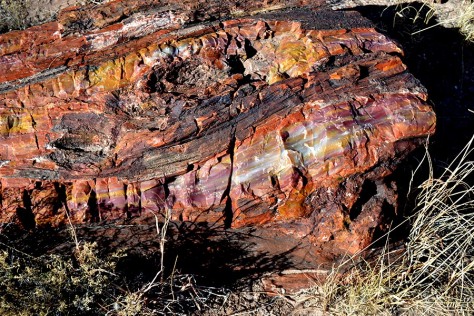 The Petrified Forest is known for its logs, which still lay as they have over the millenia.

How many pictures of petrified wood can you have? In about 3 hours I took over 600!

Right next door is the Painted Desert, another of the West’s marvels. Here, it is easy to see the various sedimental layers that have settled over the years. The soil, rich in magnesiums, takes on beautiful colors. 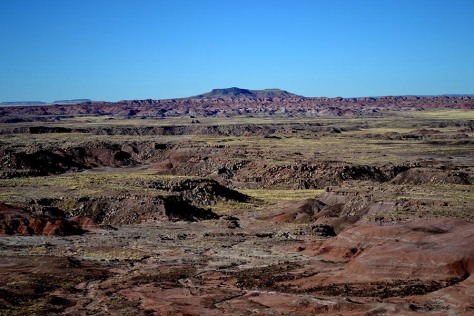 This area stretches for hundreds of miles.

The ancient peoples who lived here left numerous petroglyphs for us to find. I think it’s amazing how much detail we can still get from these ancient writings.

This is a view of Newspaper rock from above. You can barely see the petroglyphs from here.

But with a telescopic lense, you can see the extremely detailed pictures. The detail of the man and woman here is absolutely exquisite. Corn maiden and the hunter are telling others what time of year and where it is best to hunt in this area. 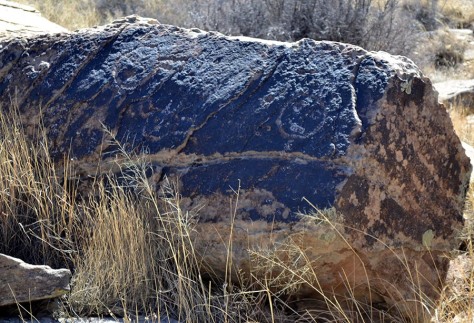 These petroglyphs a little further down the road show the kachina spirits these people worshiped. 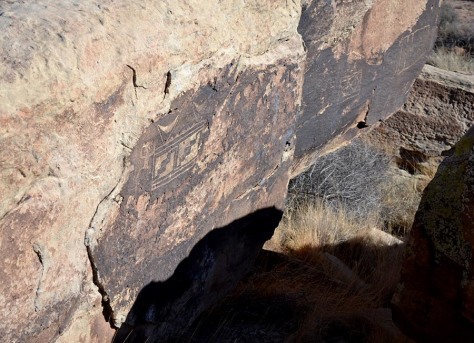 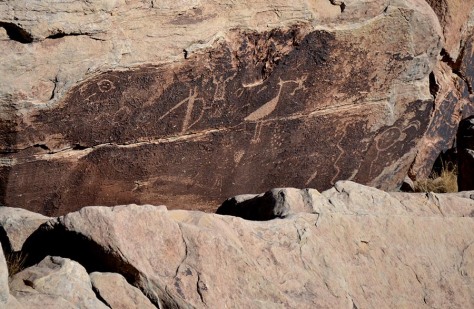 This is one of my favorites, I can only imagine a giant Ibis carrying someone off! This was probably a mythological story. 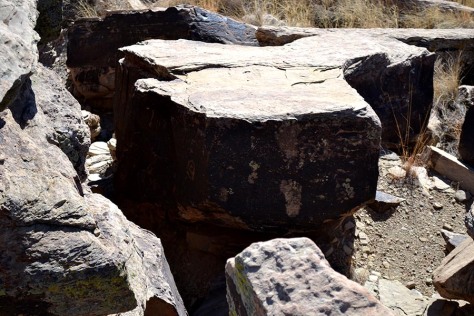 This is one of the wonders of the ancient world, the path of the sun flowed over this rock to hit the spiral on the left. It was an ancient way of telling time! 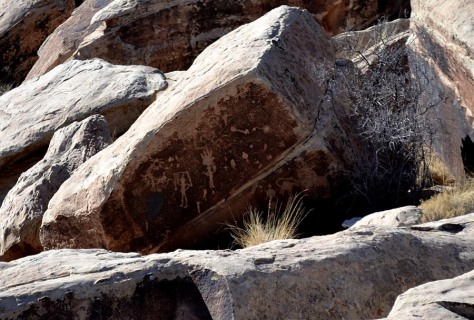 In this area, there was once a dwelling with over a hundred rooms! Very little remains today, other than some low stone walls and a kiva. 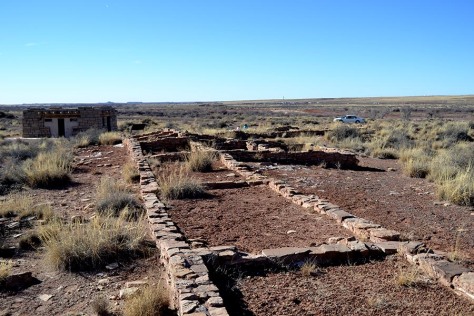 The Puerco Pueblo probably housed around 200 people at one time. 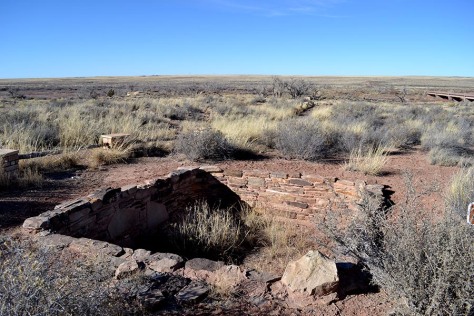 The other thing that amazed me were all of the ravens that followed us around all day long! They were huge and very happy to see us at each stop.

We fed them pretzels and they happily let us get up close and personal! They were excellent models! 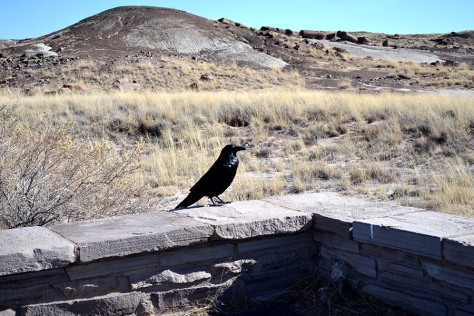 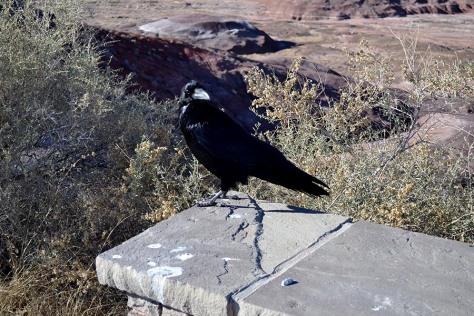 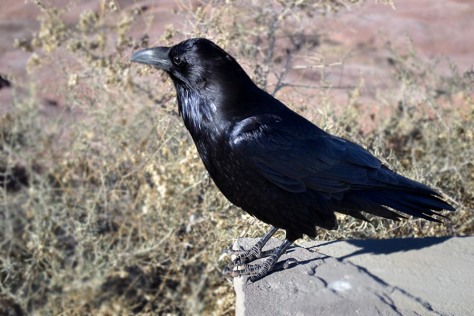 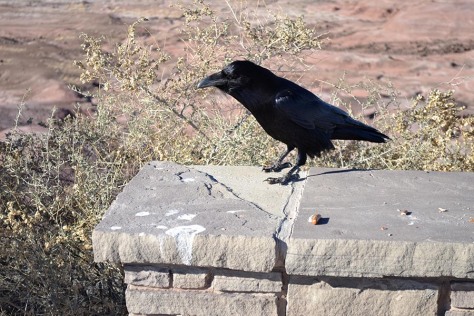 To the Navajo, the Raven was a trickster, who was always trying to find food! He even ate the spots off his own toes! But he was also a creator and brought light to the peoples.

The story goes that…

Once upon a time, the only light in the world was hoarded by a mean old Chief who was not disposed to share it. RAVEN, bored of fluttering around in the dark, decided this would not do. So he turned himself into a cedar leaf and sneakily fluttered into the chief’s dwelling.

The Chief’s daughter was sipping a drink and RAVEN fluttered into the cup as she raised it to her lips. Swallowing him down, she immediately became pregnant and gave birth. Which caused no end of confusion.

The baby had raven-black hair, dark glowing eyes, and was very temperamental. Whenever it was bored, it shrieked. The Chief, trying to be a doting grandpa, said: “Give the baby what it wants”. So they gave the baby a bag of shining stars. It played merrily with these, until one day in gurgling excitement it threw them through the smoke hole in the ceiling and they scattered up into the sky.

Oh dear. The baby is bored again. It’s bawling. It wants another bag. It’s driving the household crazy. It must be pacified. So they give it a bag containing the Moon and soon the baby is happy again, bouncing the Moon all over the place. You’ll never guess what happens next. Whoooosh! — up through the smoke hole goes the Moon. (Pause for gasp of astonishment from the audience).

Deprived of another toy, the baby becomes really disruptive. The Chief is tearing his hair out. The whole household is muttering. Find something, anything, to keep the baby quiet! The baby rejects all homemade playthings and points to the last bag. Uh-oh. They give it to the baby but with dire warnings. “Don’t untie it because it contains Light — and that leaks like nobody’s business.”

Now you think you know what’s going to happen. But you don’t. What happened is that the baby turned back into RAVEN, cried “Ka very much” and flew through the smoke hole carrying the bag in his beak. He’d stolen the Sun.

RAVEN spread light throughout the world and so the Chief’s daylight saving scheme came to an end. He was very disgruntled. His recorded comments contain very strong language in the Tsimshian dialect.

Ravens are found throughout world mythology. I grew up with the rhyme:

Three for a girl,

Four for a boy,

Seven for a secret never to be told.

While this is a traditional nursery rhyme about magpies, here in the U.S., it is the way to interpret the number of ravens that you see!

I was happy to do pictures for the Navajo trickster though. I think we got some excellent shots.

The desert is a beautiful, hazardous place. It’s a wonder that anyone or anything without modern technology managed to live there.

*All photos were taken by me, please don’t use without permission!