Apparently Initiation hasn’t just changed how I feel about myself, but how others perceive me as well; most notably, the children.

My S.O. and I ventured out into the world today to attempt some grocery shopping. Our pantry was depressingly bare after having gone through the marathon of Mardi Gras and then traveling to PantheaCon. Even though we got back late Tuesday night, I’ve had a serious sinus infection and both of us have been drop dead tired from the trip. (Kenny has also been recuperating from severe food poisoning at PantheaCon).

Since I don’t get the parental memos that apparently go around, I was not aware that today was “Take Your Adorable Child to the Grocery Store Day”. I usually despise trips to the store when this happens; masses of children are everywhere and it’s hard to just grab your things and Get Out While You Can. While I like children, I like them from afar. I guess I babysat way too much as a teenager. Also, for the past few years I’ve lived in college towns, working weird late night shifts, and little people just weren’t as present in my usual 2 am grocery forays. I forget to watch for them and inevitably end up almost stepping on one, resulting in being glared at by annoyed parents. (And who could blame them? I would probably glare at me as well).

While I’m used to scaring small children at the grocery store, today I seemed to absolutely terrify them. Generally I think my tall, booted, tattooed, pierced, crazy-haired appearance is what does it. But today I had many more intense reactions than usual. Children fled from my mere shadow. While this made my shopping experience slightly easier, this makes me wonder about how much more children see than adults do.

Christopher Moore, one of my favorite authors, has a quote in his novel Lamb: The Gospel According to Biff, Christ’s Childhood Pal (which is just as awesome as it sounds) that says “Children see magic because they look for it”. This quote always resonated in my own life and I have worked to make sure that adulthood hasn’t meant losing my sight of the the magical things I grew up believing in. This is probably in some sense what led me to where I am right now.

I’ve been working on a tattoo sleeve of fairy tales for a while now. One of the main pieces is the Wicked Witch. The witch in fairy tales is really the Initiating Priestess and to me at least, the character that usually drives many of the events of the tale to their rightful conclusion. Without a villain, what would the heroine have to do to triumph or change to become the person they need to be at the end of the tale? When my mother exclaimed “Why in the world would you tattoo the witch on you?!!!” my reply was “but I AM the witch”. It never occurred to me to be anything else. 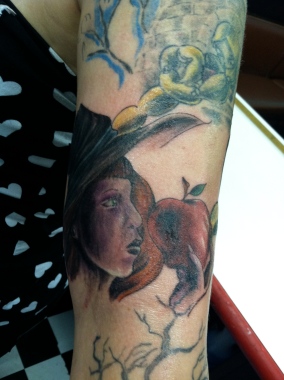 As I stalked through the bustling aisles of our local Rouses, a few little girls paused in the aisle; instead of running and hiding behind their parents as the rest did, these girls paused in the middle of the aisle and unabashedly stared up at me in fascination. And I had the thought that maybe someday these were the same little girls that might come seeking me out for their own Initiations…how strange.