I was in Texas just last weekend for the Texas Renaissance Festival. Coming home, we made a quick gas station stop. I was waiting for my friends to finish checking out as I browsed the area full of Texas souvenirs. You know how bigger gas stations always have those areas of cheap shot glasses and key chains and other various and sundry junk that you can take home to your loved ones? I’m always a little horrified and fascinated by these things, and usually take a second to look at whatever the gas station I find myself in has to offer. This time around I was delighted to find a Jackalope keychain for sale on the shelves. It had a Texas plaque attached to it, but that didn’t matter: The Jackalope was too awesome for me to pass up.

The Jackalope is a quintessential piece of American folklore. It also happens to be one of my favorites.

The Jackalope was first “spotted” in Wyoming by cowboys out on the range. It is said that the animal can mimic human voices. One of the most common stories is that when cowboys sat around their campfires, singing at night, the Jackalopes would sing along with them.

For those of you that don’t know what a Jackalope is, it’s a horned hare found out West. The Legend of the Jackalope is that it is one of the rarest animals in the world. Most say that it is a cross between the now extinct pygmy-deer and a species of killer-rabbit (speaking of mythical, who knew we had those?). None have ever been captured alive.

Most agree that a Jackalope will attack you on sight,  but that when they flee they like to shout out things to misdirect pursuers, like “There he goes!” or “Over there!”. I always found it odd that such a supposedly fearsome beast would like to sing with the cowboys and would use misdirection to escape instead of attacking. I imagine Jackalopes have some fearsome teeth!

One website claims that the Jackalope “will attack if cornered or provoked.  To avoid injury, quickly fall to the ground, remain calm and still while humming the Roy Rogers song, “Happy Trails to You”.”

Who wouldn’t attack if cornered and provoked? And who wouldn’t be calmed down by some Roy Rogers? Add some whiskey into all of that and it sounds like you and the Jackalope could make a pretty good night of it.

Most will argue that the Jackalope is purely a creature of myth. But it is interesting to note, that while jackalopes are thought to be distinctly American, there have been other stories around the world that described a “Horned Hare”.

Zakariya Ibn Muhammad al-Qazwini (1203-1283), a Persian scholar who wrote accounts of Alexander the Great, tells a story about Alexander saving an island from a dragon by feeding it poisoned cattle. In return, the islanders gave him many gifts, one of which was a “large and ferocious yellow animal with black spots and a dark horn”. This animal was never actually named, but “other medieval Muslim scholars copied his manuscript and called the animal “al Miradj”, a horned hare”.

Joris Hoefnagel painted this picture of the Jackalope in the 1570’s. 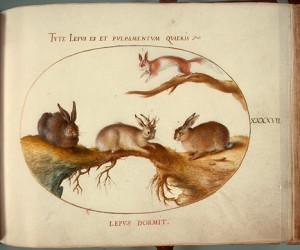 In 1606, the edition of Conrad Gesner’s Thierbuch (a German version of the first book his Historia Animalium by Konrad Forer, first published in 1563) and P. Gaspar Schott’s Physica Curiosa published in 1667 shows a tiny horned figure in the lower left hand corner.

Another interesting myth is that Jackalopes only mate in the middle of thunder storms when lightning strikes. I personally think this must make things rather interesting for the poor Jackalope. Can you imagine mating in the midst of all of that and trying to avoid lightning while you’re at it?

The Jackalope is also known for producing milk that will heal almost anything. It is often called the “warrior rabbit.” Legend has it that if you catch a female Jackalope sleeping on its back, you can milk it and harness the amazing healing powers for yourself.

There are scientific explanations of the Jackalope. Rabbits are known to get what is called the Shope papilloma virus, a virus

I’ve personally never seen a Jackalope, but would love to have the chance to do so. One of these days, I’m going to take a massive roadtrip across the Southwest to see some of the sights and visit the National Parks. Catching sight of a Jackalope is definitely going to be one of my high priorities for that trip.

I’m fascinated by the place that the Jackalope holds in American Folklore. Our folklore is so new in comparison to the lore of old world countries, and thus can be tracked much differently. Many people say that the Jackalope was made up by a man named John Colter of Wyoming in 1829. To this day, the town that Colter lives in has a Jackalope Day and a town statue of the Jackalope. One can obtain Jackalope hunting licenses. This is also the reason that most Americans will tell you that the Jackalope is a hoax; Most people trace the stories back to John Colter and dismiss it.

I prefer to think that there is no logical explanation for  the Jackalope. It is a being of magic and mystery. I hope to one day be camping out West, singing around the campfire one night, and to hear something start to sing along with me. I’ll be sure to bring an extra bottle of Whiskey with me for the occasion.

And as the Pixar short film Boundin’ has to say, “Now in this world of ups and downs, so nice to know there are Jackalopes around”. 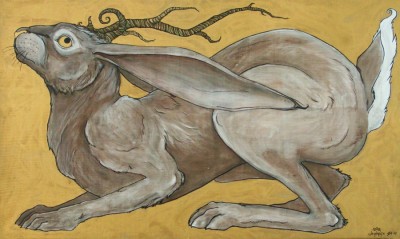