It is that time of year once again and Mardi Gras is literally right around the corner. I actually managed to drag myself out to the Muses parade last night.

Muses has always been my favorite parade. I think it embodies the best parts of local Mardi Gras and while more and more tourists are coming to it, it’s still largely a local crowd. A lot of kids, a lot of great costumes and the Krewe of Muses always does a lot of great things for their community. And they always have the best throws.

My camera and I had a fight throughout the night. It has been awhile since I’ve done any photography, but I got a few good ones that I thought I would share. While I did not get a shoe this year, I was not disappointed by the parade. 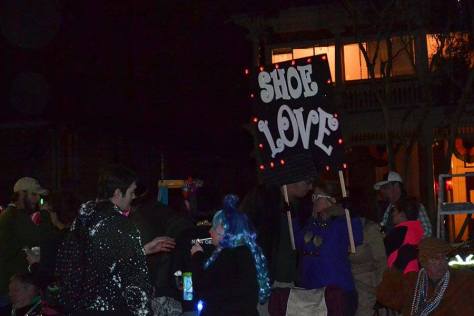 This lady had a truly impressive sign and was ready before the parade started rolling. 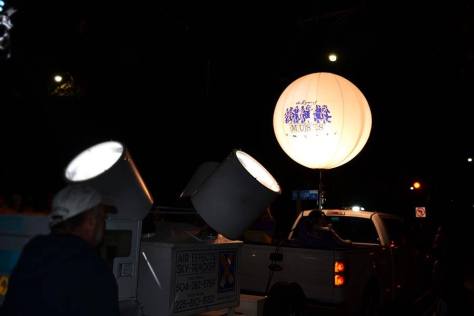 The Shriners always lead it off.

This year, the NOLA roller derby girls were the first line of the parade after the Shriners. The Big Easy Rollergirls were a lot of fun! 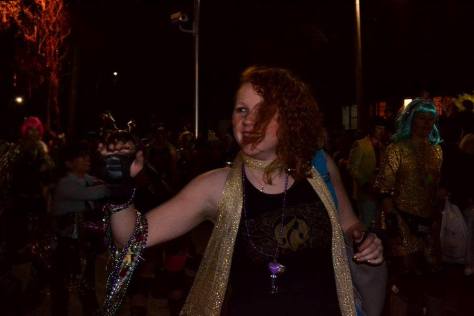 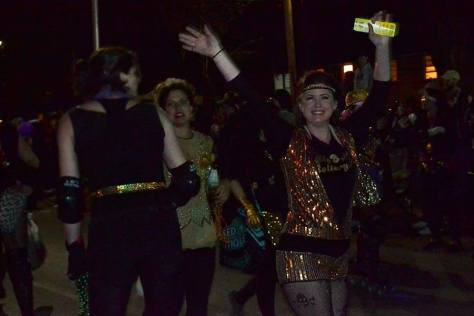 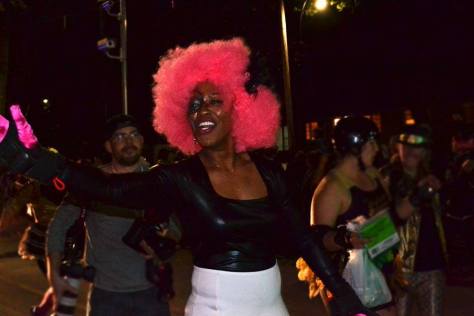 The beautiful lit up butterflies came next and the official Muses front float. 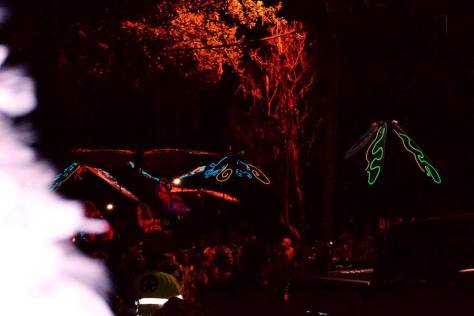 Next came the Muses Head Shoe and the Honorary Muse of the year. This year it was Sue Zemanick, the executive chef at local Gautreau’s.

This shoe is always very cool.

The floats were great this year, though that certainly wasn’t a surprise. The Bathing Muses always start them off and the amazing (and my absolute favorite float ever) the Sirens always finishes them off. This year the riders were as sassy and excited to be out as ever!

This was one of my favorite shots of the night. She is holding two shoes, one of which was made to look like the infamous Leg Lamp from The Christmas Story!

The Shoe! People go nuts over these! Each shoe is handmade and each rider only has a few of them to give out. Outside of the Zulu coconut throw, these are probably the most prized throws of local Mardi Gras. 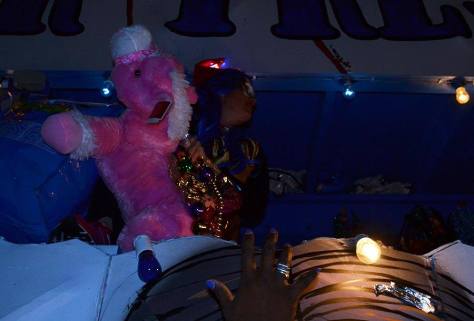 Big Throw! This rider was hanging off the side of the float to catch the attention of a friend in the crowd. 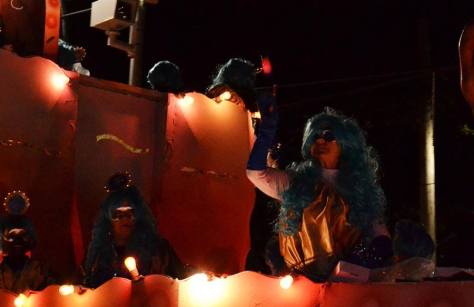 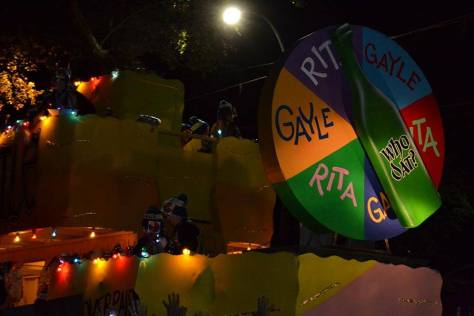 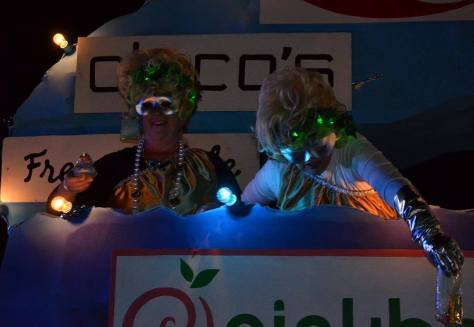 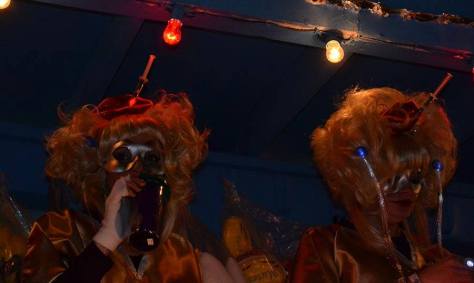 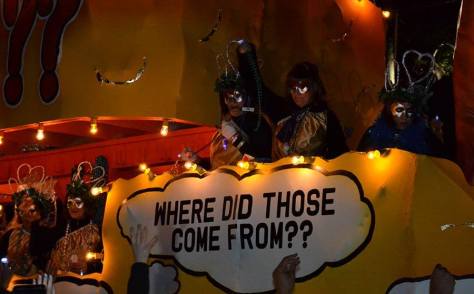 The Sirens float is my favorite.

Here is an article about the float with some more pictures. One of my favorite descriptions of New Orleans is from this article:

“The city of New Orleans is a very, very seductive place,” said Gisleson over the racket of power saws and spray-paint compressors. “It’s a place where the humidity almost has a personality, where letters open themselves and candles melt without being lit. We wanted to take that whole idea of seduction that is inherent in the Sirens (mythological creatures who lured sailors to their doom) and set it in our hometown.”

This float has over 200 lbs of glitter incorporated into it and it always comes at the end of the parade. When Muses was forming, they originally considered calling themselves Sirens instead. In mythology though, the Muses defeated the Sirens in a singing contest, so the all female krewe decided to go with Muses. To honor the Sirens though, they put them at the end of the parade, right in front of the fire trucks that always bring up the end of a parade and that blare their sirens loudly.

The Circus Arts kids were out and I caught this guy balancing his unicycle on his chin. They are always a fun edition to the parade.

The Rolling Elvi were out. This is a fun subkrewe that allows everyone to go full out with Elvis! Clockwork Elvis, a popular local band that mashes Elvis and Clockwork Orange, performed with them. 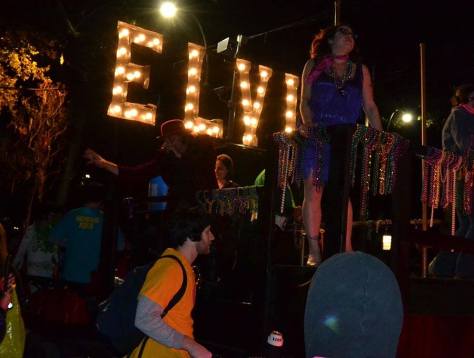 The Noisician Coalition is always a fun jumble of noise and costumes.

The Bearded Oysters are always amongst my favorites as well. Katrina Brees started this subkrewe and also created the amazing bikes below. Katrina created the I Heart Louisiana group, which works hard to get krewes to throw environmentally friendly throws. 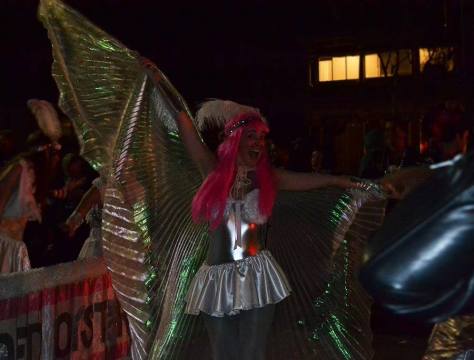 This guy was playing with a local band that floated past…

I always enjoy seeing the Laissez Boys too…

And Bate Bunda too! 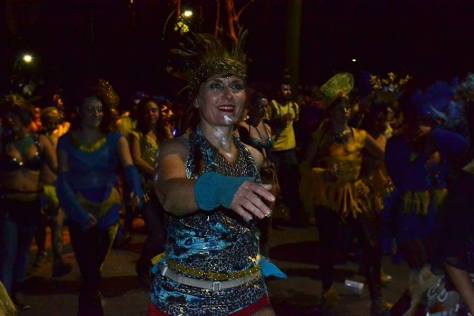 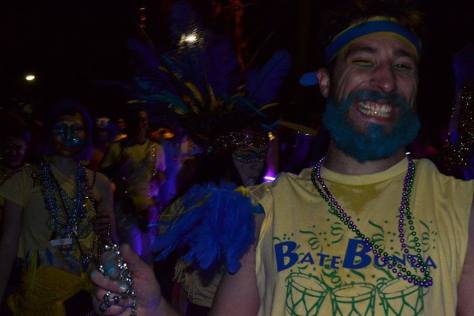 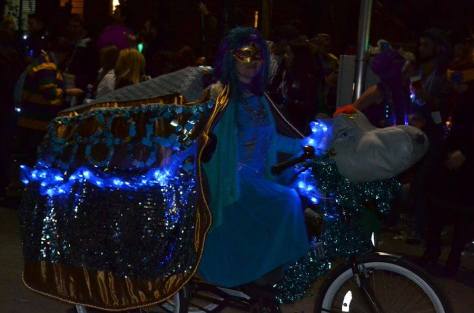 While the ending of the parade was bittersweet for me this year, it is definitely one you should get to and check out. Muses is a great time and just keeps getting better and better as the years go by.

*All photos copyright by Lauren DeVoe. Please do not use without permission!