It seems like everyone has an Athame, a Chalice and a wand these days. But some of the other basic tools of a traditional Wiccan altar seem to be overlooked. Let’s take a look at some of them:

The Boline is a white handled knife that is usually used as the working altar knife. If the Athame is one of the spiritual tools of the altar, that cuts or draws magical energy in ritual and spell working, the Boline is the physical tool used in basic altar needs and in preparing for any ritual work that you might do, such as in carving candles, trimming wicks, and cutting cords. I’ve heard the Boline compared to a utility knife and I think this is a pretty good analogy for the role that it plays.

The Boline is still a magical tool. It’s energy is just as important as one’s Athame. Most people who work with them still consecrate them like any other altar tool and keep them away from the hands of strangers. The Boline is the knife that you can carry with you out to the garden to cut herbs, it’s the tool to get down and dirty with. It’s a very practical sort of magical tool. While one probably only uses one’s Athame (in traditional Wicca at least) during ritual and as a symbolic tool, the Boline is often carried about and used in much more of a practical manner for ritual or spellwork.

The Bolines sold in most stores these days are shaped like a scythe. While a scythe shaped Boline is traditional, I find that it isn’t always good for anything other than cutting herbs and the garden. I prefer something a little more along the lines of this one… 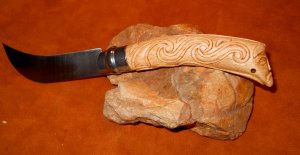 A Boline like this is much more practical for any sort of task you might come up against.

The use of the Boline shows up in traditional training and it’s not something that you usually find in books. Because of this, it seems to be largely forgotten. In traditional Wicca, there is actually two different types of “practical knives”, the Boline and a separate tool just called the White-Handled Knife. In this scenario, the Boline is used primarily for gardening and the White-Handled knife for carving and cutting on the actual altar. For the most part, in most BTW, these two different knives have evolved into being the same thing. (I’m sure that not all teachers would agree with this). There is also a great debate over whether the Boline/White-Handled Knife is actually a magical tool. I personally see it as being an extension of any magical work I’m doing and treat it as any of my other magical tools, but the way this tool is handled probably depends on the person using it and the tradition that they are in.

The Pantacle is almost entirely forgotten. The Pantacle is a plate that sits on the altar and is used as a teaching tool. It is traditionally round with symbols carved into it to help students learn the lessons of the Craft. In the past it was made of wax, so it could be broken up and thrown into the fire if the Inquisitors showed up. It is often confused with a Pentacle. A Pantacle is not a Pentacle, a Pentacle is simply a symbol of the Craft.

In these modern days, there seems like there is little need for something like this. We have the internet, we have books: a great deal of written information is always available. In the past, information was not accessible and most people didn’t read information the way we do now. The Pantacle was a simpler way of passing on Craft knowledge.

The Staff is traditionally the tool of the Summoner, who protects the Circle from outside intrusion. It can be used as a form of physical protection and also one of spiritual protection in grounding the energy of the Circle. One of the summoner’s main jobs is to monitor the Circle and ensure that people aren’t over extending themselves in whatever ritual or work is going on. The staff helps the Summoner work with anyone who is not grounded during magical workings.

The staff was the tool of the common man. Weavers used staffs to set the loom so that things could be woven. The weaver could walk from home to home, farm to farm and set a woman’s loom without any suspicion. In this way knowledge of the times and places of meetings could be passed. Staffs are also common as walking aids, someone could travel using a staff and no one thought it odd. While the gentry carried swords, the commoners used staffs as one of their main weapons. No one would take notice of a man with a staff. To read more about the use of the Staff and the role that the Summoner plays, go read my S.O.’s book The Flowering Rod.

A witches’ Besom is more than just a broom to sweep the ground with. The Besom is used in casting the circle. Traditionally the besom is made with ash for the handle, broom for the broom bottom, willow bindings and a secret acorn at the join between the ash and the broom. The Besom is another ordinary household item that could not be held up in a court as a symbol of witchcraft. The Besom is used in handfasting ceremonies, as a household charm for fertility, and several other things. Usually the Besom is also used as a symbol of protection after the Circle has been closed. Go and look up Besom-lore, it is some of my favorite traditional folklore out there.

People think that a Book of Shadows is any book used in the Craft. A true Book of Shadows is used by a coven to preserve the coven’s tradition. In traditional coven training a student is not given access to a full Book of Shadows until they are a third degree initiate. The grimoire is the personal journal that the student keeps until they are initiated fully. Obviously, with the internet, we have full access to many Books of Shadows, such as Gardner’s. It’s not hard these days to just pick up a BOS and read it, understanding it, however, is another matter entirely if you have not been taught the Craft. I live with a third degree elder, I suppose I could steal his BOS and read it, but why, as a student of the Craft, would I want to? Everything in it’s time and place.

Most people have a grimoire, which is a working journal for anyone studying the Craft. Most people keep many grimoires over the course of a lifetime of working in the Craft, where you record your magical thoughts, your spells, your herblore and any other knowledge used in everyday magical working.

Blessed Mabon a little late everyone!

Life has been busy and insane! Here is my Pagan Household column and my Pagan Square blog (Mabon and the Forgotten Queen, a discussion on how we look at the story of Blodeuwedd). I promise to start writing on this blog again next week. We just survived the family apocalypse 2012 and are going to be moving into a new place this week. We will be back to our regularly scheduled programing when the dust settles! 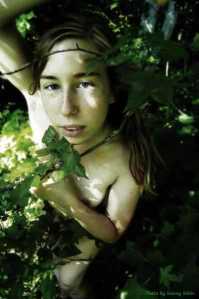 We came through Isaac alright and eventually I’ll probably do my own blog post about the experience. I’m still processing through a lot of everything that’s gone on. But, until then, here are some of my friend’s blogs about Isaac.

My S.O.’s blog about driving back to New Orleans through Isaac to get home to me – Kenny Klein Explains It All 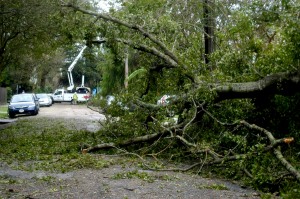